TOTY Ultimate XI - The Team of the Year for FUT 20

Learn about TOTY in FIFA, who won the last round and how to vote for TOTY Ultimate XI - The Team of the Year for FUT 20

Time is ticking and  it's a countdown for the hottest event for EA's FUT 20: The team of the year or simply TOTY (Ultimate XI)

At the time of writing this post, the result is yet to come, but once the result is out, the post will be updated with the final TOTY.

TOTY stands for the "Team of the Year", an imaginary team which is consisted of the world's best football players. And is announced each year around January 6~10th.

Traditionally, a list of well performed players will be nominated in each position to be elected as the player in the TOTY, making the ultimate team a dream and the most wanted team in the world.

This year (2020), surprisingly, the users can vote for the TOTY at EA's website, on the TOTY page. Therefore, as of this year, your vote will have an effect on the final results.

The Nominees of TOTY

There are dozens of players nominated for TOTY in the positions of Goalkeeper, Midfielder, Defender and Attacker, each of which, chosen based on their well performance in the past year. Here's the list of nominees for TOTY UltimateXI:

So, as you can see, the TOTY nominees are mainly from FC Barcelona, Real Madrid, Liverpool, Atletico Madrid, Manchester City, Arsenal and other clubs.

As a reward of the TOTY title, the players who win will be awarded a TOTY FUT pack for a limited time in the FIFA Ultimate Team.

And the winner is: 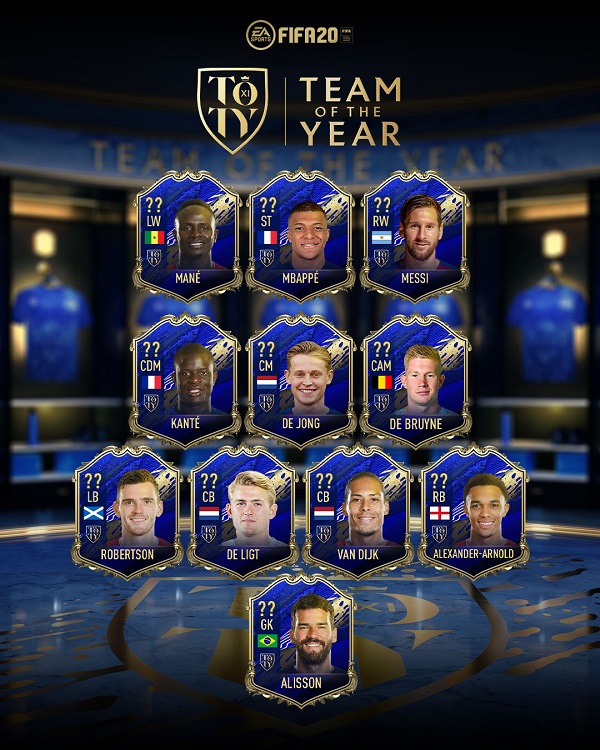