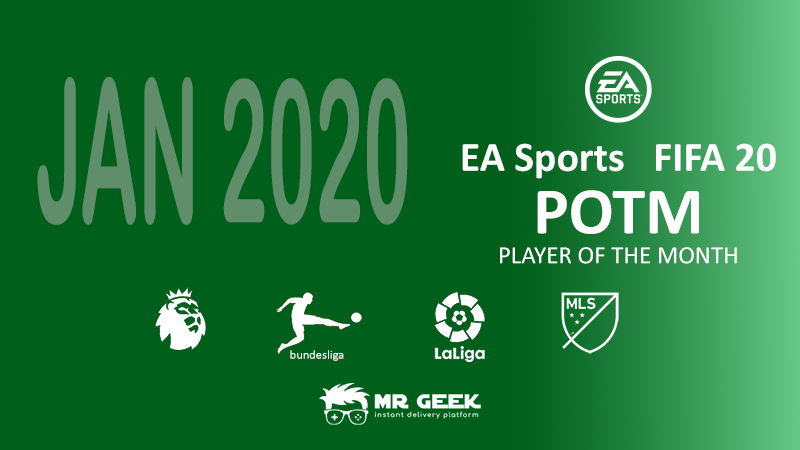 Lots of matches are being played in January 2020 and some players stand out by scoring more goals than usual or goalkeepers who keep a clean sheet or midfielders who play extraordinary well and show up as playmakers.

This page tries to evaluate the records and facts that has been gathered so far to come up with some predictions  for FIFA's POTM for January for each league and it's being updated every week to present the most accurate and up-to-date information.

Liverpool has unquestionably been the top of all clubs in the past few weeks. The last time they lost a game was against Aston Villa which crushed them down to the ground by 5-0. It dated December 17th, and ever since, Liverpool has won every match so far. Their next match on Jan 19th is against Man United. We need if they can keep the no loss streak.

Aguero scored three goals vs. Crystal Palace and Sheffield United. There's a high possibility that he's elected as the POTM in January.

Jimenez saved the day in their match against Southampton and scored another goal vs. Liverpool. I would pick him for POTM.

He is a great player and currently number 9 in the top scorers in Premier League. 2 goals and one assists so far.

He scored two goals so far, both of which in the game against Norwich. He has been the best finisher so far so the chances of POTM is high for him. Rashford is the second top scorer of Premier League so far.

Wood is also a contender in POTM by scoring 2 goals and 1 assist.

Traore also has been a great playmaker. There are chances for him as well.

Other players that performed really good include:

The matches in January 2020 were hot with lots of goals in each game. Let's have a look at the players that performed really good.

Haaland has been unquestionably the best finisher in Bundesliga in January and has a high potential of being selected as the POTM of Bundesliga in Jan. He scored 3 goals in their match vs. Augsburg.

And in the same match against Dortmund, Niederlechner played very well for Augsburg by scoring 2 goals. High possibility for being the POTM.

Cordoba is a great player. He scored two goals against Wolfsburg. There is a chance that he's selected as POTM.

Werner plays for Lebzig. He also has performed well against Union Berlin by scoring 2 goals. He's one of the nominees of POTM.

Volland also showed up as a great player in their game vs. Paderborn. He scored 2 goals. He has a good chance of being selected.

These players also performed great and have chances of being chosen at the potm in Jan:

For La Liga in January 2020, there have been lots of hot matches going on. Eight matches have been played so far.

Let's have a look who stands out and is predicted to win the POTM of LaLiga.

Varane has played great in Real's match against Getafe. He scored two goals and there's a high chance that he's selected for POTM in January.

Suarez scored one goal and assisted another goal in Barcelona's match vs. Espanyol. Such a great performance. He also has a chance to be selected as the POTM in LaLiga.

The League 1 of France has been really hot with lots of goals so far in January.

Lots of players performed well so it's difficult to choose one for nomination for POTM. But here are MrGeek's POTM predictions:

Charbonnier has been great. In just one game, he has scored two goals and assisted another goal. Highly possible to be chosen for January POTM in League 1.

Diakite also was a great player in Toulouse match vs. Brest. Although they lost the game, but Diakite scored the only two goals of his team. Highly possible to be chosen as the player of the month in Jan 2020.

Lots of other players performed great by scoring one goal and assisting another goal in just one match. The names include:

There's a chance for them too to perform better in future matches to win the title of POTM in January.