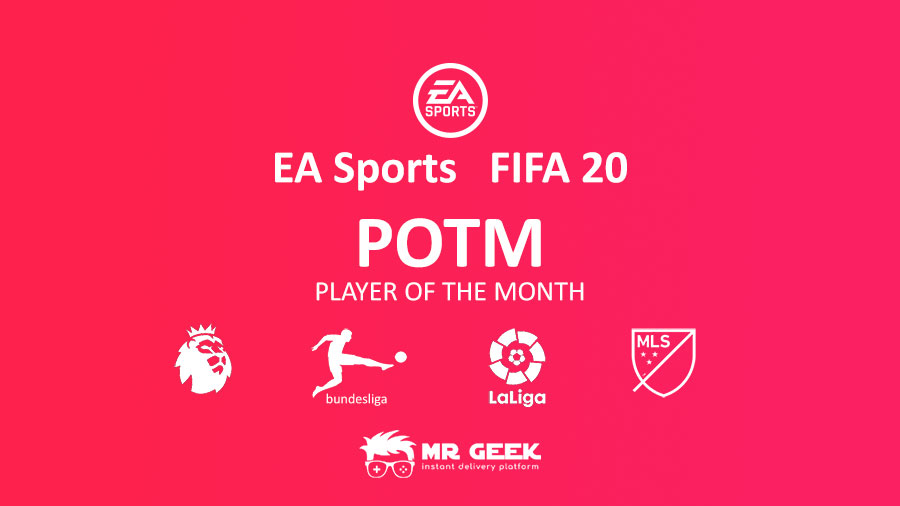 FIFA's Player of the Month a.k.a. POTM

Everything you need to know about POTM or the player of the month in FIFA 20. The history of EA's sponsorship of Premier League POTM and extending the success to Bundesliga, League 1, etc. With a glance at POTM Predictions.

In 2016, EA and Premier League moved their relationship to another level by introducing Player of the Month, sponsored by Electronic Arts. The release of the game back then was FIFA 17. To the fans of football simulator games, EA's FIFA is the most authentic football game in the world, as EA is entitled to use the real names of the clubs and players in the game.

Once a player wins the POTM title, he will be rewarded a powered-up FUT card and a plaque from EA Sports. The POTM cards in FIFA are very unique cards that are rarely found when the players complete SBC's, and you cannot sell those POTM FUT Cards. You've ought to use them or they'll expire. With a POTM card in your squad, you'll be able to make a lot of FUT 20 coins; almost unbeatable!

How is the POTM Selected?

The POTM title is given to football players of Premier League and other leagues based on their performance in the timespan of 1 month. The POTM is chosen by a set of votes from Football experts, captains of the Premier League teams, and also public votes (which affects only 10% of the results).

POTM for Bundesliga and Other Leagues

EA moved forward, after the first years of success with sponsoring Premier League, to sign sponsorship contracts with other leagues such as Bundesliga, League 1 and MLS.

How to vote for the POTM

In order to register your vote for POTM, first you need to visit EA's POTM page. There, you'd be able to choose from:

After clicking on the desired league, you'd be directed to a league-specific page for voting, and as for League 1, you'd be redirected to a completely different website. But the other two leagues will acquire your vote inside EA's website.

If you're visiting the voting page right after the elections, you'd see the result of the last elected player of the month. Something like this: 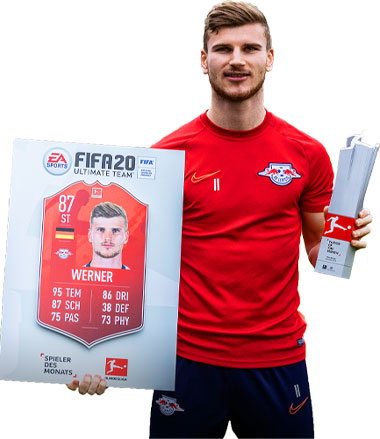 Timo Werner as shown in the picture, has been awarded as the POTM in November 2019 in Bundesliga (FIFA 20).

Now, in other times of visiting the voting page, you'd see a list of nominated players to vote for as the player of the very month that you're visiting the page on. It means, the visitors will be able to vote for only the time-span of that 30 days or less that's left to elect the next POTM. You can't vote for next 2 months or so.

Okay, now that you've chosen the right league to vote, you must choose one of the nominees from the list: 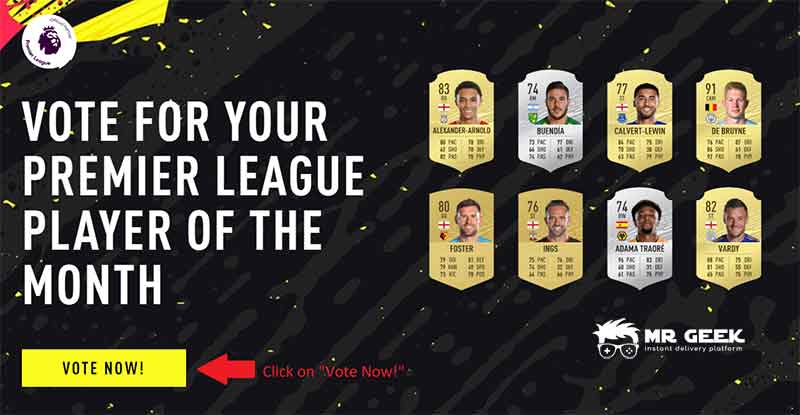 Based on what criteria should you pick your players? You must watch the POTM video of each month in which the players' top scores (or defences in case of goalees) are compiled in a short video. 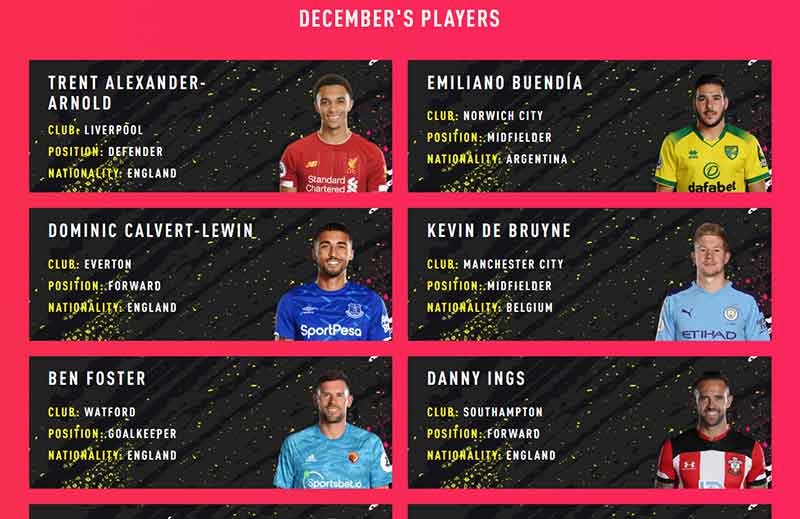 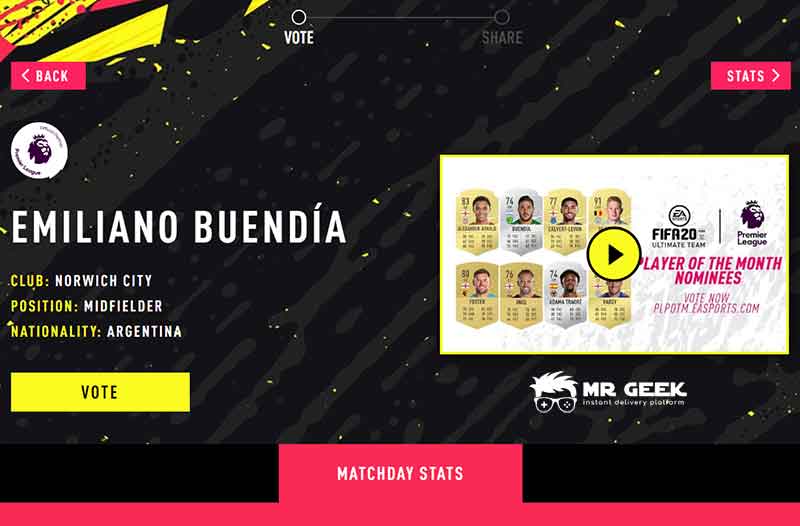 As you can see, the video is ready to watch after you choose a random player from the list. Now, if you scroll down, you'd see the options to change the player: 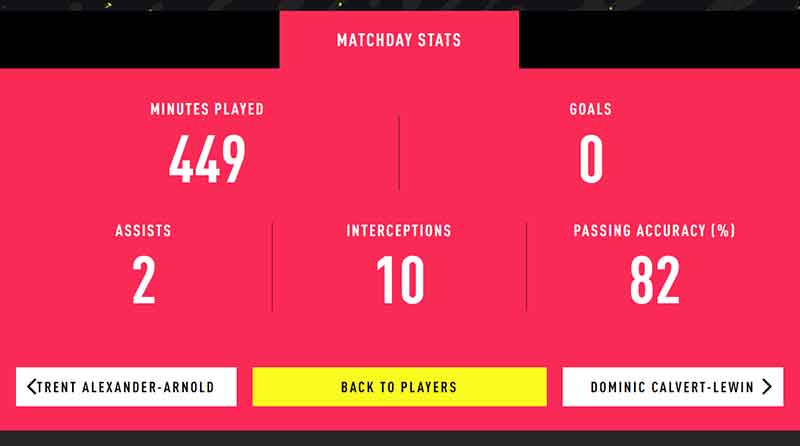 Okay, by clicking on "VOTE" on the left side of the video, you'll vote for the selected player. A thank you prompt will pop up:

Done! Now your vote has been registered and you'll hear the results when they elect the next POTM.

Some users are interested in predictions of the POTM.

How is that possible? Soccer (Football) experts and analyzers will evaluate the games played in Premier League, will watch the awesome goals scored (or saved), and come up with some predictions that the POTM could finally be chosen from. Usually scores, or winning MOTM (man of the match) title. having a clean sheet, beautiful goal scores, winning goals, saving the day,  are the criteria by which they come up with some predictions for POTM.

Of course, whatever the predictions will be, the results will be based on different votes and as a result, the predictions could turn out wrong, but the analyses would suggest the closest possible players who would win the POTM title.

MrGeek will keep the users updated about POTM predictions.

This page will be updated frequently: