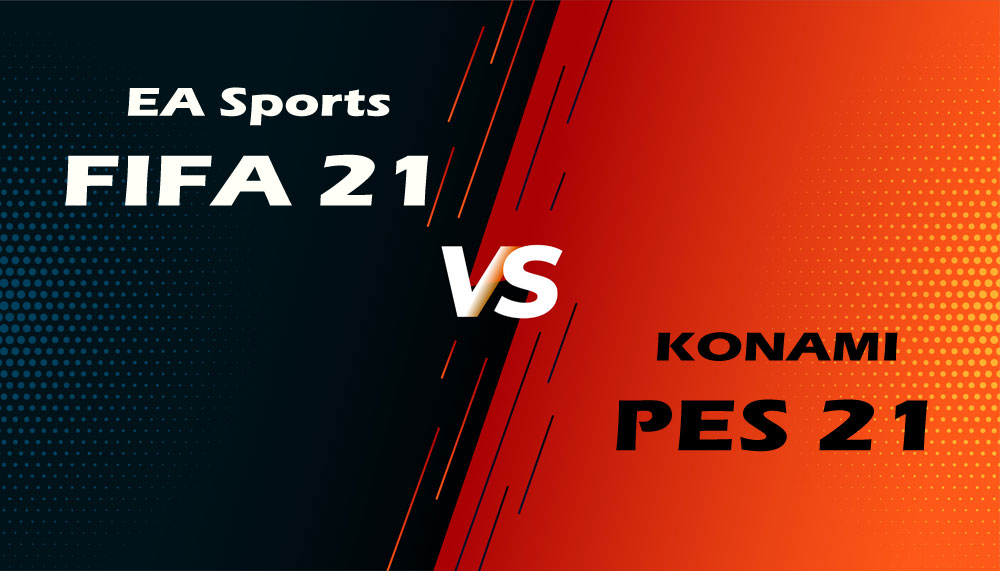 Comparing new releases of Konami PES and EA FIFA 21 in terms of release date, features, gameplay, technologies, and so on.

Konami recently reported that there would not be a new PES 21 with a new installation, yet it will be released as a substantial update with a much lower price than usual.

This idea is based on the fact that the world is dealing with a bigger problem, and also the delay will give them enough time to elevate the process for the magnificent PES 22 version, adaptable for the next-generation consoles on the unreal engine.

Although at the time the PES fans are happy about the lower price and consider this decision a nice gesture related to the Pandemic situation, FIFA fans are quite furious! Some of them are even threatening to boycott the FIFA 21 and also don't buy points or coins anymore.

Here and there you will hear or read from some skeptical players that PES promising for different features in the new update is just a marketing scam, and nothing is going to change.

But FIFA fanatic players are eagerly waiting for FIFA 21 version to release which is expected to be the most advanced video game of the century. Lots of excitement and trades are waiting for the new FIFA experience. People are eager to buy FIFA 21 Coins to speed up building their new squad.

If you are a game geek and want to get playing the second it becomes available, follow the news bellow:

EA confirmed that FIFA 21 would be released on current-gen consoles on 9 October 2020. And if you pre-order the FIFA 21 Ultimate Edition or Champion Edition, it is available on 6 October.

The FIFA 21 Demo is usually released two or three weeks before the actual game, so It is exciting to know that you would expect it in early-to-mid September. With demo, you can play FIFA 21 for free. We discussed this in our previous article in details.

If you want to know the exact time, the schedule is as below:

The new version will be available for PS4, Xbox One, PC and Nintendo Switch at first, and then on PS5, and Xbox Series X.

The awesome news is that EA Sports is offering to upgrade the copy you purchase for free if you've bought the latest generation console.

Also, a player can carry over his FUT and VOLTA progress from one console to the next.

It is assumed that by playing the game on next-generation consoles, you will get more significant visuals and some other specific features.

PlayStation 5 will have its specific features for FIFA 21. The FIFA controller and haptic feedback will create the best experience of your gaming life.

There is no clear sign of any particular changes for Xbox Series X from PS5. But lately, Microsoft has been using the word "Xbox Series X Specialized" which may mean they are going to be different.

Based on the news, the FIFA 21, and FIFA 21 Legacy Edition will be coming to Nintendo Switch users. It has updated menus, audio, players, and kits.

As usual, the debate on who gets to be this year's cover star is noisy and hot. Pervious covers were presented by the greatest record-breaking athlete like Galactico Eden Hazard, Lionel Messi, Cristiano Ronaldo, Ronaldinho, and Thierry Henry.

This year, it has been rumored that Kevin De Bruyne will be the Champion Edition cover followed by Kylian Mbapp on Standard Edition and Franz Beckenbauer for Ultimate Edition.

FIFA community website has commenced a vote on who should be on the cover this year. So far, the predictions states:

Also, it is hopeful that AC and Inter Milan will be exclusively present in FIFA 21 after Konami lost them.