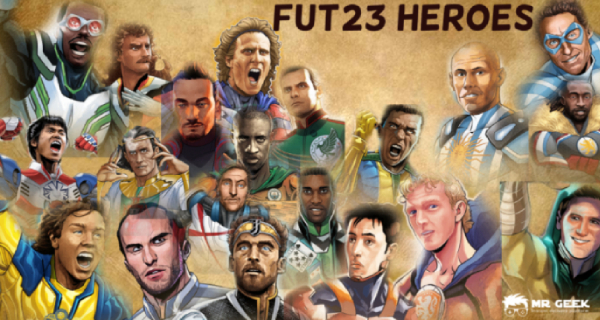 During a recent news release, it was revealed that EA and FIFA 23 will be partnering with Marvel Entertainment, and each FUT Heroes dynamic player image will be officially illustrated by Marvel Comics. Electronic Arts unveiled hero cards on its Twitter account and we see great players like Rudy Fuller, Diego Forlan and Lucio.

According to the news, it has been revealed that EA has introduced 21 new FUT Heroes items and confirmed the FUT Heroes FIFA 23 player rankings. FUT Heroes items are awarded to players who have achieved cult hero status during their careers.

For the first time in FUT's 14-year history, unique artwork will replace actual in-game player photos for 21 selected FIFA World Cup Champions FUT items. EA Sport's Way of Heroes is one of the ways to bring back the club's former legends.

Also, each card has a unique chemical composition specific to the league. after the release of FIFA 23, players can use the new FUT Heroes in the FIFA Ultimate Team game mode. And a total of seven Premier League FUT Champions is said to be released in FIFA 23.

If you don't know how to access the champions, you can pre-purchase FIFA 23 until August 22nd, you will receive a non-tradeable FUT World Cup Champion. You can also lucky draw FUT Heroes from packs or buy them in the transfer market.

Special moments of the World Cup

You can see fifa23 heroes' card below: